DELUGE: RETURN OF THE VIDEOCASSETTES BY PAUL HALLIDAY

Original Deluge as part of Tapescape Catford: The Intervention I by Paul Halliday. 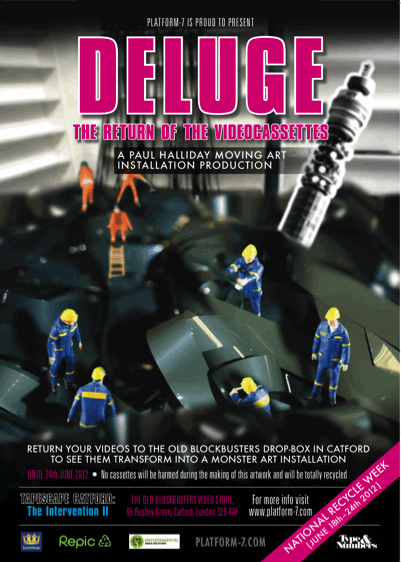 Poster by Daniel Crawford from Type&Numbers

RETURN OF THE VIDEOCASSETTES

More than a thousand old videocassettes will be recycled after an art installation at a former Blockbuster video shop in Catford SE6 in April.

“Tapescape Catford: The Intervention I” received such a big response that Lewisham Council, owners of the Blockbuster have extended the use of the premises to Platform-7 Events to display ‘Deluge’, a moving installation by artist Paul Halliday

Deluge explores notions of flow, flux and the morphologies of redundancy. The installation uses VHS tapes, returned as part of a ‘tape amnesty’, to slowly grow, as if the tape was gushing out from the shelves, creating a glistening pool of dark magnetic detritus that forces us to look closer and imagine what is left as traces of memory. The scale of the pool of tape inspired discussions from children to grandparents on how much waste just one cassette creates, and the size of the task dealing with disposing of this now obsolete technology

Sponsored by Repic and Lewisham Council, the video amnesty will be extended until June 24 with Lewisham residents able to return old videocassettes, players and other redundant entertainment technologies to the disused Blockbuster drop box to become part of a new larger and more frightening ‘Deluge’ installation. Over the next four weeks, people can watch through the windows of the Blockbuster as the installation expands at a terrifying rate, reflecting the waste disaster we face.

A bank of old televisions will transmit images 24 hours a day reminding passer-by’s of the rapid speed of redundancy that exists with modern media technology.

Artist Paul Halliday says: ‘The response to the original group exhibition was really good, and we didn’t imagine that so many people would bring in their used VHS cassettes. It’s quite strange to see the installation spreading across the floor like this, especially given that the space was so profoundly associated with this now redundant technology.’

John McKiernan, founder of Platform-7 says: ‘The way people interacted with the artwork and performances during our two week event at the Blockbuster really shows how many are thinking about the environmental damage we all cause and how art can focus the discussion and help challenge the accepted wisdom’

Dr Philip Morton, CEO of Repic said: “It’s really important that WEEE is recycled responsibly, end of life electronic and electrical equipment can end up at landfill which is damaging to the environment. It may even find its way into the hands of illegal traders who unlawfully transport the WEEE to Africa or other developing countries with a potentially devastating social and environmental impact.”

All videocassettes returned to Blockbuster will be fully recycled by EMS Limited and all electrical items will be recycled by Repic Limited, in line with WEEE (The Waste Electrical and Electronic Equipment) Directive in conjunction with Lewisham Council.

‘Deluge’ can be viewed 24hours a day from Wednesday 23rd May

RETURN OF THE VIDEOCASSETTES

How to get there:

Paul Halliday has an exhibition opening at Horniman Museum this year and will publish three books on his London work, material cultures in urban spaces, and images from a global project about ‘nowhereness’. He is the founding co-director of Urban Encounters, and continues to curate this annual conference and seminar programme at Tate Britain. Paul has been collaborating with Platform-7, see below, for several years, the most recent being a conference held at Goldsmiths focusing on the relationship between London and its related South Coast (City to Sea, 2011).

Platform-7 is a micro events company that creates live performance in public space that we see as blank canvas for artists to create and communicate original and challenging work that encourages audiences to notice things they see everyday.

London Underground has confirmed the company can use 30 tube stations simultaneously across central London for its international ‘no man’s land’ event in November 2012. The company has recently created interventions in Catford, South London, (April 2012), Margate, Kent (Summer 2011) and its annual signature event for Remembrance ‘Up The Line’ is presently being readied to appear in cemeteries nationally. www.platform-7.com

Repic is the largest not for profit Producer Compliance Scheme in the UK and are responsible for around 50% of the WEEE collected in the UK. Repic is always keen to work with the local community to promote WEEE recycling and have been working with Lewisham Council since 2007 to ensure that all waste electrical items deposited at its sites are recycled responsibly.

The London Borough of Lewisham is a London borough in South-east London, England and forms part of Inner London. The principal settlement of the borough is Lewisham. The local authority is Lewisham London Borough Council and it is based in Catford. Last year Lewisham dealt with the responsible disposal of 224 tonnes of WEEE recycling (April 2011-March 2012). Much more is disposed inappropriately and by co-sponsoring this event, awareness of WEEE recycling will be raised. Lewisham Waste & Recycling Team will be running a number of events during National Recycle Week (June 18 – 24th June)

EMS specialise in the recycling of all types of recordable media and electronic equipment. Providing waste management solutions for the television production, broadcast and medical industry. Certified by FACT and licensed as a carrier and broker of waste, the material is handled in a safe and legal manner.

Blockbuster LLC (formerly "Blockbuster Inc.") is an American-based provider of home video and video game rental services, originally through video rental shops . At its peak in 2009, Blockbuster had up to 60,000 employees. Because of competition from other video rental companies such as Netflix, Blockbuster has undergone significant revenue losses. The company filed for bankruptcy on September 23, 2010,[4] and on April 6, 2011, was won by satellite television provider Dish Network at auction for $233 million and the assumption of $87 million in liabilities and other obligations.

Blockbuster Catford was heavily looted during the 2011 summer riots and the management decided not to restock and handed back the keys to the landlord, Lewisham Council. The store has since remained vacant although several potential tenants are interested in letting the site.

FURTHER INFORMATION ABOUT APRIL 2012 EVENT ‘TAPESCAPE CATFORD: THE INTERVENTION I’

Using art installations, soundscapes, spoken word, discussions, talks, screenings, dance, games and more, the intervention questions the impact video has made on all our lives, how it affected our behaviour and the huge environmental cost of our short-lived innovations.

We held a 'Video Amnesty' allowing Lewisham residents to bring in old videocassettes and players to be returned to the shelves for one last time before heading off to be completely recycled and re-emerge as something new.

The aim of these Platform-7 art interventions is for the space to transmogrify each day as the audience interacts with the work. New artwork or performance arrives and other artwork leaves, continuously creating a distracting place, often uncomfortable to understand.

A full description of the artist involved is available on the website: http://www.platform-7.com/apps/blog/tapescape-catford-artists-1